The U.S. Army Is Making Ear Protection for Its Very Good Boys

Military working dogs (MWDs) have become a major part of the U.S. Military. From base security to dogs that accompany special forces on raids, dogs are indispensable assets, capable of running down bad guys on the field. A new technology known as CAPS now promises to protect their hearing, ensuring that the rigors of working in the field won’t render an Army working dog deaf.

MWDs, like other members of the military, are often exposed to loud noises that could inflict hearing damage. Helicopters, explosions, gunfire all generate noise that is above safe levels. For humans that’s all no big deal—ear protection is regularly issued to prevent hearing loss.

Dogs have exceptional hearing, allowing them to hear sounds that humans cannot. Existing forms of dog hearing protection are simply adaptations of human ear protection. Other fido ear pro is described as “cumbersome” and difficult to put on a dog. 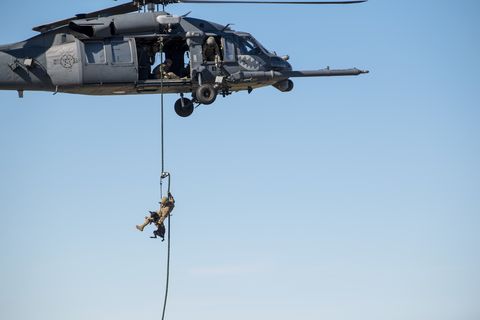 Now, the U.S. Army has developed the Canine Auditory Protection System, or CAPS. CAPS fits like a hood over a dog’s ears, preventing short term hearing loss. Stars and Stripes describes it like this:

“A little more than an inch thick, the system is made of lightweight acoustic absorption materials that block unwanted sounds. The flexible system fits snugly around a dog’s head – like a hoodie – and forms a seal around the ears.”

CAPS, developed by ARL and Maryland-based Zeteo Tech, is compatible with doggie goggles and doesn’t restrict a dog’s ability to operate in tight spaces. The system was developed by the Army Research Lab, which solicited industry for ideas in 2017 on how to protect the hearing of military working dogs.